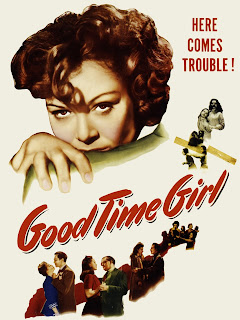 Good Time Girl (1948) In an effort to straighten out young delinquent Lyla (Diana Dors), Miss Thorpe (Flora Robson) tells the awful story of Gwen (Jean Kent), a 16 year-old who ran away from her violent home to work as a waitress in a night club owned by Max Vine (Herbert Lom). She is framed for robbery by the jealous Johnny Rosso and is sent to an Approved School. Escaping from there, she finds that Max has moved to Brighton. She hides out at his new club there, where she falls in with cheap gangster Danny Martin (Griffith Jones) and eventually a pair of murderous GI deserters. There was definitely something in the air in post-war British cinema. Ticket sales were at an all-time high as troops began to return home to find there wasn’t much by way of entertainment apart from the pub and the cinema. During the war, film audiences had been largely female, and studios made films to cater for that audience; with the return of a males to the audience, many of whom had gone through tra
Post a comment
Read more 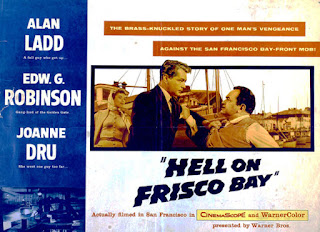 Hell on Frisco Bay is one of those semi-forgotten films doesn’t live up to its promise, but still reveals a huge amount about the times in which it was made. This late-period Noir stars Alan Ladd and Edward G. Robinson, the latter of whom (despite some career problems, which I’ll come to later) steals the film from its nominal star in an act of cinematic grand larceny. The Ladd Himself It’s often forgotten just what a huge star Alan Ladd was at the peak of his career. These days he’s mainly remembered for the enormous success of George Stevens’ monumental Western Shane , released in 1953, and for being sensitive about his lack of height. After he rocketed to stardom as the angel-faced, emotionally-damaged hired killer in 1942’s This Gun for Hire , Paramount Studios eventually discovered that they could basically put their new star in any old rubbish and audiences would turn out to see it. This was a real shame, as there are some absolute gems in Ladd’s initial period of stardom such as
Post a comment
Read more